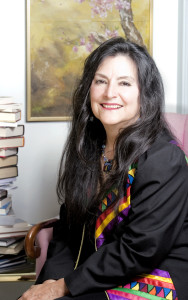 I have always been a reader—not a writer. Occasionally someone would bring to my attention a book by a Latino writer, and I would purchase and read it. The story filled my soul and made me yearn for more, but the idea of seeking out Latino/a writers to read and interview did not occur to me for years.

The idea for Latina author teleconferences was born when a young Latina in her mid-twenties, who had recently graduated from college, commented on a gift I gave her: a book by an author who also happened to be a comadre. She held the book, read the title and author,  and commented that she had never read a Latina writer. I determined she meant a U.S. Latina author, and though I was stunned, I realized it was only recently that I myself had made a commitment to become acquainted with these authors.

It occurred to me that, given our age difference, there were probably a lot of Latinas/os who were not aware of these writers who were telling our stories. Certainly, in my many conversations with comadres and other friends, we never mentioned Latina/o authors, nor did I see their books prominently displayed in bookstores. I decided to change that.

Las Comadres and Friends National Latino Book Club began as a teleconference series in 2006. In 2008, we added physical book clubs in cities where we were able to identify comadres willing to take on the coordination responsibilities.  The Association of American Publishers became our partners in this endeavor. The book club/teleconference series is now in its seventh year.

But it was another organization, Las Comadres Para Las Americas, that expanded our ability to to learn more about our lives and histories through the eyes of our Latino/a authors. Through this organization, I have had the honor of learning about the many ethnic and racial groups that make up our Latinidad. There are many labels to identify us, and each one of us chooses the one(s) that strike the right cord. It does not really matter to me, though I have recently decided that I like thinking of myself as a U.S. American of Mexican descent.

I wanted a connection to many Latinas. I wanted a community surrounding me filled with family and friends, and a place where anyone could come to feel connected. This desire was something that I carried in my heart from very early in my childhood. I was a solitary child. After being born into a family that would eventually produce ten siblings, upon my release from the hospital, I was placed into the loving arms of my aunt and uncle who raised me. I owe them my success. However, I strongly sense that being an only child until the age 10, when my cousin David was adopted into the family, fed my overwhelming need for others.

My roots were slipping away, and I was dangerously close to losing my identity. I realized that I did not want this to happen, and this was yet another personal reason for creating and building this organization: I wanted to retain my identity and my connections to my ancestors. But since I did not know my history, it was very hard to feel grounded and connected. I thought that I was alone in feeling this way, but soon found out that many U.S. Latinos had the same desire for community and a proximity to our culture as a way to preserve and celebrate who we are and where we came from.  Those who were more recent immigrants also felt isolated and were looking for others like themselves. For many who lived in areas of the country where they were surrounded by Latino culture, their reason for participating in Las Comadres was simply to get to know each other as comadres, to share resources, and build communities.

As I began to connect with other Latinas in my immediate surroundings, I found that they left our comadrazos (what we call our gatherings, a combination of comadres and abrazo) saying that what transpired in these gatherings filled their souls. Our gatherings were filling a need. Though we all mostly spoke English, meeting with others who understood and appreciated idioms, phrases, jokes, songs, etc. in Spanish, gave us an instant connection that doesn’t happen with others in mainstream English-speaking society. For example, we may be strangers, but when we hear something about chanclas, it conjures up similar images and memories for us all.  I believe this is what we share and what keeps us coming back to the next comadrazo. Even if it’s just for an evening, our gatherings connect us to our roots, our people, our language, our jokes, our laughter, our souls.

Count On Me, Tales of Sisterhoods and Fierce Friendships is a collection of twelve reflections on the importance of Las Comadres in their lives. In it, Fabiola Santiago, Luis Alberto Urrea, Reyna

Grande, and Teresa Rodriguez tell their stories of survival in the United States and in Latin America, where success would have been impossible without their friendships. Favorites like Esmeralda Santiago, Lorraine Lopez, Carolina De Robertis, Daisy Martinez, and Ana Nogales explore what it means to have a comadre help you through years of struggle and self-discovery. And authors Sofia Quintero, Stephanie Elizondo Griest, and Michelle Herrera Mulligan look at the powerful impact the humor and humanity of their Comadres brought to the darkest moments of their lives.

Our mission is to preserve and celebrate culture, to celebrate our connection to each other. In the time of Facebook, Twitter, and many other social networks, Las Comadres Para Las Americas fills Latinas’ need to connect with and lean on each other, and unlike online only networks, Las Comadres Para Las Americas offers two different ways to connect: online and in person, thus appealing to women in different situations, and offering an opportunity to strengthen friendships and cultural connections through personal interaction. We invite you to join us.